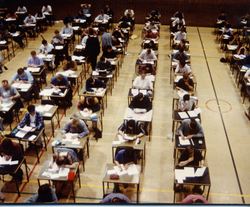 So it’s bar exam season. For law school grads, it’s a time of terror, a summer of stress, and . . . well, you get the idea. Since it’s that time of year, I thought I’d shave some tips for passing the bar without making your brain explode.

Sorry folks, there’s no way around it.  If you want to pass the bar, you need to study a lot.  Having said that . . .

Since you’re going to work hard however you do it, you might as well take some time to work out where to spend your energy. At this point, most bar exams consist of the MBE, the MEE, and the MPT.  These sections are worth 50%, 30%, and 20%, respectively. So you should spend 50% of your time on the MBE, 30% on the MEE, and 20% on the MPT right? Wrong.

The MBE covers 6 subjects. Every one will be tested heavily, and every one will affect your score if you don’t know it well. Spend your time learning these subjects. The MBE tests the most obscure details of each of these subjects, and knowing them can really boost your score. The MPT, on the other hand, covers no substantive law. If you do a few practice tests, you’ll get the idea and be fine.

The MEE covers 15 subjects including the 6 MBE subjects, but there are only 6 essays. That means 9 of the 15 subjects won’t be tested at all. Even better, 2 or 3 of the essays will probably be MBE subjects. So if you’re keeping track, of the 9 MEE-only subjects, only 3 or 4 of them are likely to be tested. If they are tested, each subject only counts for 5% of your bar-exam score. But wait, it gets better. The essays are scored out of 6; 3 is average. That means you can score a 1 or a 2 on the essay-only subjects without losing more than a couple of points compared to the average test taker (see below for why this matters.) If you couple that with getting a couple of high scores on the MBE-subject essays, you’re golden.

Here’s the takeaway: learn how the bar examiners like you to write the essays and get the basics of every subject down. Do not stress about the details. There’s enough to worry about on the MBE to keep you busy all summer.

Tip 3 – Aim for Above-Average, not Perfect

About 80% of bar exam takers pass. If you match the average test taker, you’ll pass with flying colors. No one gets a perfect score on the bar, so don’t try. Get comfortable guessing and being wrong. 65% on the MBE and 3’s on the essays is about average. Do that and you’re good.

Still, you want to do a little more than that. You want to walk out of the exam knowing you passed. You don’t want to stress out for the three months between the exam and results. Aim for 70% on the MBE and an average of 3.5-4 on the essays, and you’ll have no doubt you passed when you’re done.

Almost everyone I know (including myself) freaked out to some degree over July 4th weekend.  Don’t ask me why, it just happened. Even if you’ve read this, it’ll probably happen to you too. I don’t have any advice except to warn your loved ones that you’re probably going to go crazy around independence day.

Tip 5 – Look After Yourself

You can’t productively study for 12 hours a day. When you feel yourself flagging, take a break. Go for a run, watch a movie, play with the dog, whatever. It doesn’t matter what you do, just stop studying for an hour. Your brain, mind, and body will thank you for it.

Tip 6 – Ignore Everyone Else

You know how law school works: everyone likes to complain/brag about how much work they’re doing, what methods they’re using, etc. Don’t listen. If you want to study at night, go for it. If you don’t like you bar prep course’s schedule, change it. If you think I’m full of shit, ignore me. You are in charge here; do what works for you.

Right, one last thing: keep the exam in perspective. Most people pass, and even if you don’t, it’ll be there in February. Plenty of people who failed have been extremely successful, after all.

Right, that’s all I’ve got.  Feel free to add anything I missed in the comments.  Good luck everyone and GET BACK TO WORK!