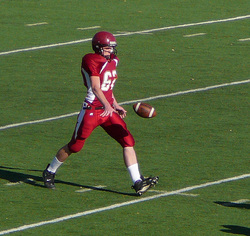 Over the weekend, an interesting employment law story boiled over. Chris Kluwe is going to sue the Minnesota Vikings for discrimination. The story has been pretty well covered, but I’m going to add my thoughts to the discussion.

Minnesota has a long history of protecting gay rights.  In fact, the state passed the US’s first law banning discrimination against transgender individuals way back in 1993 when amended its Human Rights Act to cover homosexuals and trans people.

Chris Kluwe used to be the punter for the Minnesota Vikings. He’s never been shy about being a different sort of cat. (here he is Rick Rolling commissioner Goodell on Reddit).  He’s also been an outspoken supporter of gay rights.

To be blunt, Kluwe got cut. After the 2012 football season, the Vikings drafted a punter and cut the veteran. Kluwe held his silence for a little while, presumably hoping to keep his NFL career rolling. Once it became clear he was out of luck, Kluwe spilled his guts.

He alleges he wasn’t cut because of his punting. According to him, the Vikings’ special teams coach Mike Priefer is a bigot who had a problem with Kluwe’s support of gay rights. There’s at least a little truth to the Priefer-is-a-bigot theory because the Vikings’ internal investigation into the allegations resulted them suspending Priefer for three games.

The most memorable Priefer quote, which was confirmed as accurate by the Vikings’ investigation, is “We should round up all the gays, send them to an island, and then nuke it until it glows.” This is my only reaction to that.

How Strong is Kluwe’s Case?

Kluwe’s lawyer told ESPN that the lawsuit is going to allege that Kluwe suffered religious and human rights discrimination, defamation, and tortious interference with contractual relations.

Let’s deal with the easy stuff first. The religious claim might go somewhere or it might not. Kluwe has spoken at an atheist convention and describes himself as agnostic, Prefer apparently believes “the only truth is Jesus Christ and the bible.” Without more information though, I can’t say much more. Maybe Priefer cut him because he’s not a christian, maybe not. Same goes for the tortious interference with contract and defamation claims. Maybe, maybe not. For these to survive, Kluwe has to prove that he wasn’t hired by another team because the Vikings lied to stop him getting a job. In a league where almost every player is disposable and veterans command relatively high minimum salaries, Kluwe has an uphill climb to show he wasn’t hired because of something the Vikings said rather than simple NFL economics.

Now, let’s get into the reasons everyone’s interested in this case: whether Kluwe was fired for supporting gay rights and whether that’s illegal. This is where the human rights discrimination Kluwe’s lawyer talked about comes in.  The Human Rights Act is Minnesota’s anti-discrimination law we talked about a little earlier, which bans discrimination based on sexual orientation.

Here’s Kluwe’s best claim: he was retaliated against for opposing violations of the Human Rights Act. Specifically, Kluwe has to prove he had a good faith belief that Priefer’s actions were illegal sexual-orientation harassment and the Vikings cut him because he was opposing it.

Basically Kluwe wins if he can prove he was fighting illegal harassment in the locker room. His challenge is going to be that his advocacy mostly focussed on national issues not workplace specific ones. He supported marriage equality and gay rights, sure, but it’s unclear how much he complained about the homophobic comments internally before he got cut. There’s evidence that he made some sort of complaint, but the circumstances are still pretty cloudy.

Here’s where everything could get really interesting. What if one of Kluwe’s former teammates is gay? Suddenly, Kluwe’s claim looks that much better. We’re well into the realm of wild speculation here, but maybe this is the impetus needed for a gay veteran NFL player to come out. It would be sad if a lawsuit forced someone’s hand like that, but it would change the complexion of the case quite a bit, especially if Kluwe knew about it.

What Do the Viking’s Say?

Their position is that they fired Kluwe because of his punting performance had dropped off, which the experts say is questionable; because of his age and salary; and because his advocacy had become a distraction to the team. The distraction argument is interesting. If that’s a valid reason to fire someone, where’s the limit? Does “we didn’t fire him because he’s gay; his gayness just became too distracting” become a valid excuse. I’d say no, but it’s the Minnesota Courts that matter, and they’re going to have their say pretty soon.

Things are gonna get ugly.  Actually, uglier is more accurate. On Friday things really heated up, and we all heard the sound of settlement negotiations failing. First, the Vikings released some snippets from their internal report. Obviously they released the part where Kluwe joked about the Sundusky sex-abuse scandal. Apparently subscribing to the go-big-or-go-home philosophy, Kluwe shot back that the Vikings ignored it when two of their players were “caught in a compromising situation” with an underage girl. Both sides are  out for blood at this point and don’t seem to care if they have to leverage sex assault victims to smear the other side.

It’s only going to get worse from here too. Lawsuits like this take a year, minimum, to get into a courtroom (if it gets that far), and they usually result in a few explosive revelations along the way. No doubt this one’s going to be quite the fireworks show.

Stay tuned; I’m interested in where this one goes, so you’ll be hearing more from me on it soon.